Get an accurate price

Sound travels through the air in waves, those waves cause the objects they come into contact with to vibrate. When a sound is loud enough, those vibrations travel through walls, floors and ceilings, transferring sound to surrounding areas.

At Extra Rooms, we are expert at ensuring that your garden recording studios and music rooms are built in a way that minimises sound escaping.

Sounds consist of pressure waves. The intensity of sound is known as the sound pressure level, or SPL.

The human ear can detect a wide range of sound pressure levels. Sounds can be very soft, such as the ticking of a wristwatch, or very loud, such as a top fuel dragster doing a burnout. The intensity of sound pressure can be measured, and is expressed as decibels, or dB.

Alexander Graham Bell founded the concept of decibels and formulated a logarithmic scale based on 10. "Deci" refers to the base 10 log scale, and "bell" refers to Alexander Bell.

The human body reacts to this physical force through HEARING and FEELING the bombardment of sounds.

When sudden, strong sounds reach the ear, and are transmitted to the brain, the body reacts by triggering the autonomic nervous system. This automatic system is in place to protect us against danger. This system produces the "fight or flight" adrenaline response, which prepares the body to either fight a danger, or flee from danger.

In addition, when intense sound waves are combined with excessive low-frequency vibrations, the effect is tremendously damaging to the body, as well as to physical structures, such as buildings, etc.

A few examples of decibel readings

Why are insulated walls not enough to stop sound transfer in a garden studio?

In most buildings, walls and floors have an interior support structure of wood, steel studs or joists. These are covered with some form of rigid sheeting like plasterboard or particle board flooring, leaving an air space between the walls, floors and ceilings. This air space allows for the easy transfer of sound waves with very little solid mass for the sound to vibrate through or slow its transfer.

One of the most common methods used to reduce the transfer of this sound is to insulate the wall, floor or ceiling with one of several types of insulation. However, although this technique may reduce the transfer of sound vibrations through the air space, it does nothing to stop the sound transferred through studs, plasterboards, joists or flooring.

Many people have found this out to their cost by having sound deadening insulation installed only to find that the bass beats come through almost unaffected, as if no insulation was present. High pitched sounds also often travel through uninterrupted.

So how is sound transferred in an insulated wall?

De-coupling creates a space between the drywall and studs. This greatly reduces the vibration and resulting transfer of sound. This solution can be achieved during construction by placing a resilient rubber cushion between the plasterboard and studs to absorb the vibrations.

Alternatively, another (and arguably more effective) method is to install a cushioning sheet over the stud wall and under the drywall, or over floor joists and under sub-flooring. When combined with insulating the air space between walls and floors, de-coupling will result in a significant reduction in the transfer of high, low and mid-range sound frequencies.

Can you enhance this sound protection even further?

Yes! When used together, each of these standard methods can go a long way in controlling the transfer of unwanted sound. However, at Extra Rooms we also fit windows with sound isolating shutters (to both leafs), apply acoustic triple glazing and use noise lock doors. When combined, the effect of all these solutions is tremendous.

Do you have an example of how effective Extra Room’s soundproofed music rooms are?

Yes! We conducted the following experiment on a recording studio and mixing room we built recently:

A large ghetto blaster was placed inside, a few inches away from the front walls (we say walls because it was built a room within a room – for maximum effect) of the building and the music volume was pumped up to the max. The reading was over 120 decibels - this is the threshold of pain, and hearing loss can occur after less than 8 minutes at this level.

The ghetto blaster was left on and the doors to the recording studio and music room were closed.  We then took a decibel meter reading outside the building. The decibel meter scale starts at just over 50 decibels and the needle did not even move, no reading was achieved. (At this point we were concerned that the decibel meter had broken (from the initial reading next to the ghetto blaster) but whispering to comment on this made it bounce violently to the right – phew!)

Music could be heard by the human ear, but only if one stopped breathing and strained to hear. If we moved away a few yards then nothing could be heard at all. We stood and listened for a few minutes, at one stage we thought we could hear something again, until the customer realised and pointed out that this was music from down the street as he did not have that track!

You may not need this level of effectiveness, but at the same time, you do not want to find your studio is not as effective as you need it to be. Talk to Extra Rooms, tell us what level you require and we will supply it in an attractive building at the lowest price possible, bespoke, turnkey and guaranteed. 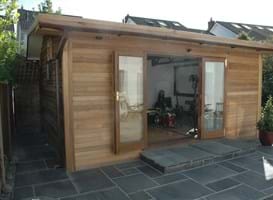 Built to the highest soundproof specification 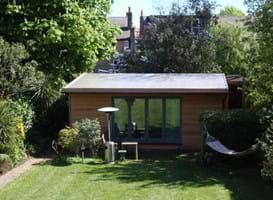 A large sound-proofed music room, with progress photos and specifications.

Get our latest brochure