Hi Extra-Roomers! Here’s a little story to prove that size is important – but not in the way you might think!

Potential customers often enquire about smaller sized garden rooms, expecting that they will cost less. Indeed they do, but only to a certain extent.

Smaller garden studios, say 8ft by 8ft (2.4m by 2.4m) often still have the same amount of windows as a larger building, they still have a door or french doors. They all take a certain time to plaster and the same time to dry, all will have two electrical circuits, power and lighting, plus a consumer unit.

A smaller building will also have the same number of skirtings to be mitred or jointed, they are just longer in a larger building.

Each building will also require a team of men to transport it, supply a foundation and re-assemble, including lifting the roof panels into place. Whether there are two roof panels or four, two men cannot do that alone and even though their time on-site may be a little shorter, they most likely still need to be paid for the full day.

So the installation time is a little less but site, fuel and transport costs are virtually the same.

So when customers get a quote and then decide that they can make do with a smaller building, in the hope of reducing costs, they are often disappointed to find the cost only drops a little; certainly not pro-rata.

In practice, that means that we have a default minimum charge, and it is around 7k plus VAT. (We learned this about 12 years ago with a building that was only 6ft by 5 ft). We charged pro-rata per square foot and once we came away from site, we realised that with a princely sum of £3k (back in the day!) we had made a large loss. What plonkers we were! It seems so obvious now, but it was early days and pro-rata seemed to be fair and make sense.

So conversely, once we have given a quote for a medium-sized garden studio, say of around 12 sq metres, 3m by 4m, at around 12k, customers are surprised to find that to have it 3m by 5m, which is 25% larger, we only charge 14k as opposed to the larger increase they had expected.

A 30sq metre building generally works out at around 24-26k as opposed to perhaps the 31k they might expect.

So prices do vary according to size, but not as much as you would think and if you have the space there are great advantages of having a larger garden office or garden room, not just the extra usability, but better value for money.

One thing we’ve never heard a single one of our hundreds of customers say:

“I wish we had ordered a smaller one". 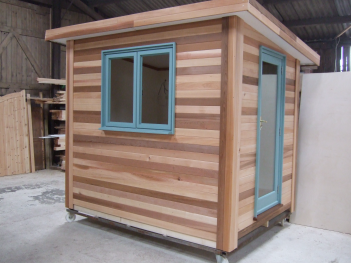